Repeated Miscarriage- A Painful experience for the couples 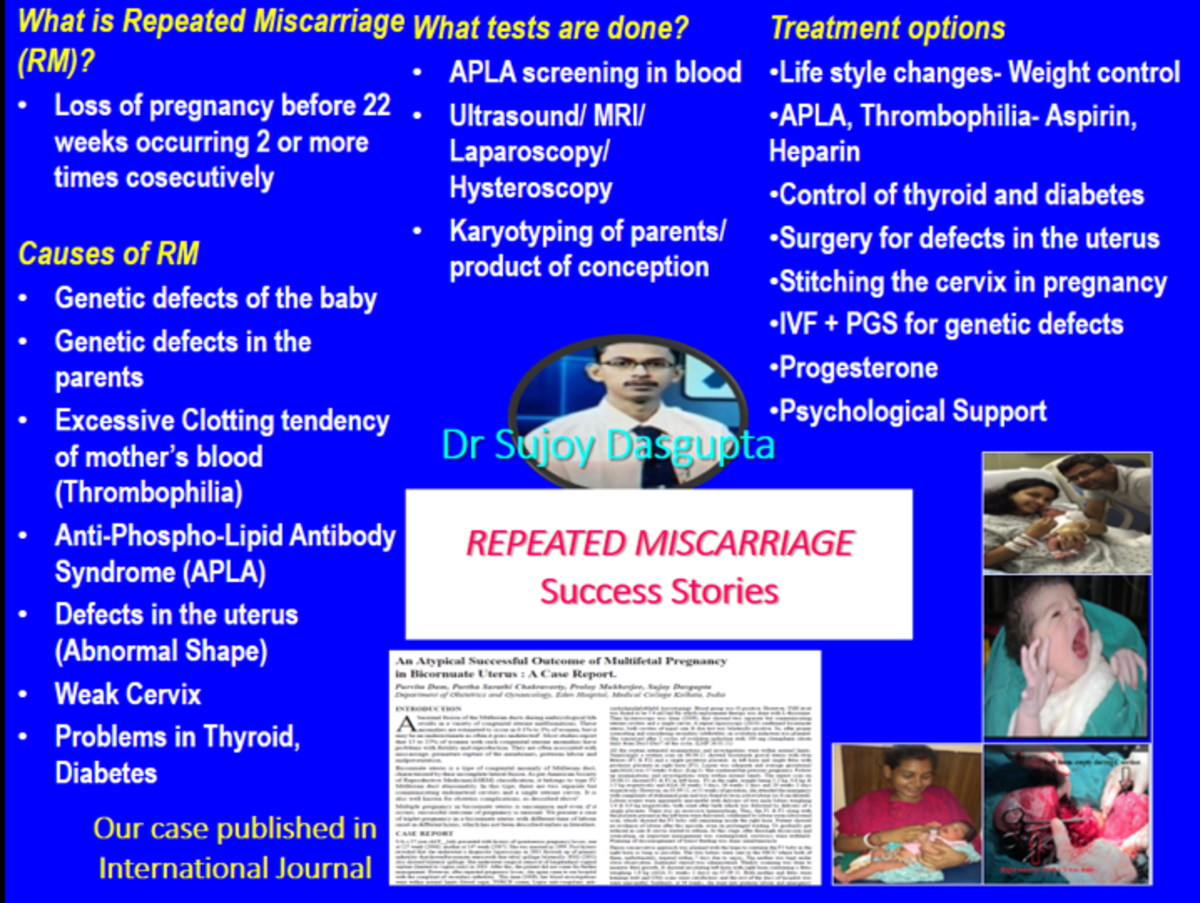 Pregnancy gives a woman completeness by turning her into mother from a simple woman. It is the thing which makes the couple parents, the dream which they nurture right time from their marriage. Of course there are many couples who are not fortunate enough to achieve pregnancy and they are usually termed infertile and we have discussed it in separate post. But there are other couples who may or may not (as this is the usual case) find difficult to conceive but the pregnancy does not continue to the age of viability. Age of viability means the age, when a baby born can survive. Thanks to the improvement in neonatal care by leaps and bounds and availability of NICU which made it possible to survive even a baby born at 22 weeks. For example last month we delivered a baby at 28 weeks of pregnancy, who is fine now. But if the baby is 'born' before 20 weeks, it is called MISCARRIAGE. This is because these babies who weigh less than 500 gram cannot survive outside the uterus. It is seen that 10-15% couples who conceive successfully may not be able to carry pregnancy beyond 20 weeks. Thus the miscarriage rate for a single pregnancy is 10-15%. But in most of the time this mishap does not recur in future. We call it 'sporadic miscarriage' and often the cause is not known. But almost 1% of the couples who want to get pregnant may suffer from repeated miscarriage. That means the unfortunate events can repeat. These are called 'RECURRENT MISCARRIAGE' or 'REPEATED PREGNANCY LOSS *RPL). 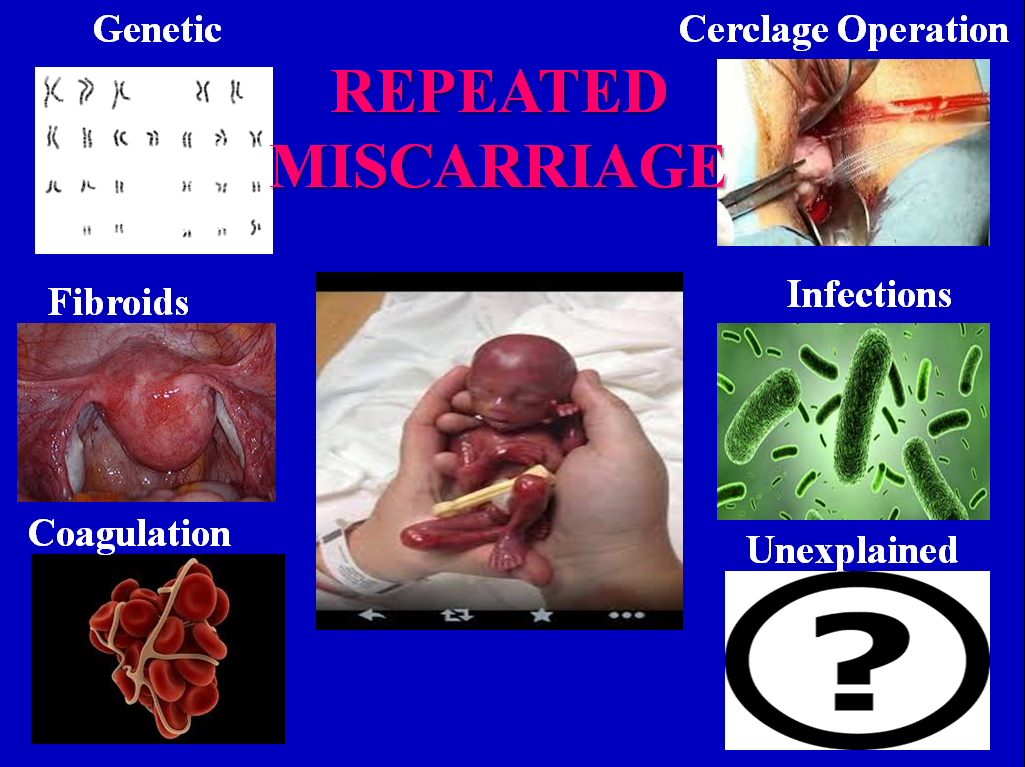 So, what's the reason for RPL which is equally frustrating for the patients as well as the doctors? First of all let me honestly confess that in most of the cases the cause is not known (50-60%) and this is called 'UNEXPLAINED RPL'. Again we have to admit that despite tremendous advancement in science, the knowledge behind RPL is limited. Many theories and causes have ben proposed but most of them could not withstand the taste of time. That means if a problem is found in husband or wife, we are not certain whether the treatment of that problem will prevent future miscarriage. This should be explained properly to the couples to have realistic expectations and avoid unnecessary frustration s in future. Only factors which are definitely associated with RPL are only two- anti-phospholipid antibody syndrome (APS) and chromosomal problem of either of the couples. Detection and treatment of these problems are often rewarding as after treatment pregnancy continuation rate us very high. The other causes have been proposed but as mentioned above the link between RPL and these causes are not yet very clear and need further scientific research. Please remember according to the timing, RPL may be divided into two categories- the 1st trimester RPL (occurring before 12 weeks in each pregnancy) or second trimester RPL (12-20 weeks in each pregnancy). 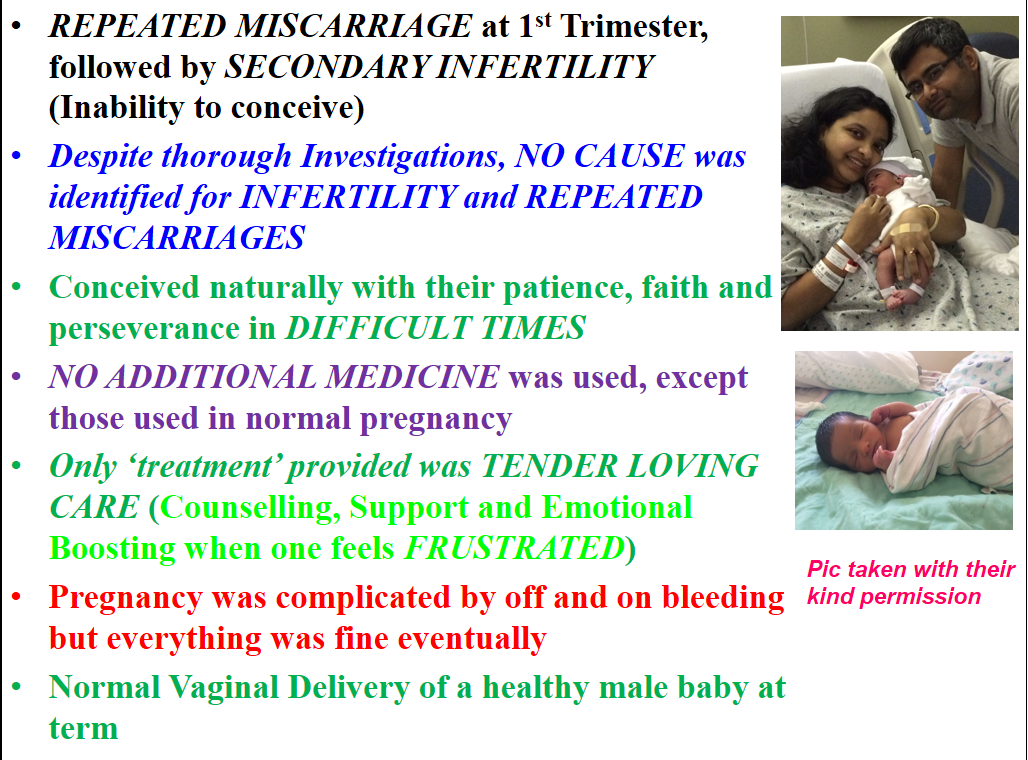 4-5% cases may be due to genetic or chromosomal problem of the couples. These problems can affect the egg (ovum) and/or the sperms. Even if the couples are normal, the baby may have abnormal chromosome.It is blessing that a genetically abnormal baby is miscarried by the nature, otherwise if it survives there is high chance that it may be mentally or physically handicapped. The reason may be increased age of the mother (above 35 years especially), exposure of mother to some environmental pollutants or sometimes increased age of the father (the latter is controversial). The diagnosis is done by chromosomal analysis of the couple by Karyotyping or FISH from blood samples. If the baby has been miscarried, it may be rational to send the tissue of the baby for chromosomal analysis to find out the cause. The treatment option in next pregnancy in such cases is genetic counseling by an expert and in most cases unfortunately only one option remains- that us IVF and PGD (pre implantation genetic diagnosis) where only genetically tested normal embryos are transferred by IVF ('test tube baby').

Anatomical factors are responsible for 12-15% if RPL, in most cases the second trimester RPL. The most common cause is 'CERVICAL INCOMPETENCE'. The cervix is the mouth of the uterus which should remain closed in pregnancy to support pregnancy and should only open during delivery. But in some cases it can open prematurely leading to miscarriage. Usually this causes apparently painless miscarriage. In many women fibroid is found as a tumour of uterus. Whether fibroids cause RPL is again very controversial among the scientists and doctors. In some women who had repeated abortion or surgery to uterus and even tuberculosis (TB) there may be adhesion (binding together) between the walks of uterus. This is called Asherman Syndrome which causes scanty or absent periods and RPL. In few women there may be Congenital Anomaly of the uterus- that is where is some abnormalities inside uterus from birth. Thesr xan sometimes cause RPL, although controversial. These anatomical problems are diagnosed by proper examination, some tests like HSG (hystero salpingogram), SSG (sono salpingogram), 3D ultrasonography (USG), MRI, hysteroscopy and/or laparoscopy, depending on the women and test results. The treatment should be done cautiously as treatment may not always prevent RPL. For cervical incompetence usually we put stitch in the cervix in pregnancy or sometimes before pregnancy. Operation xan be done, before pregnancy for fibroids, Asherman and congenital anomalies. 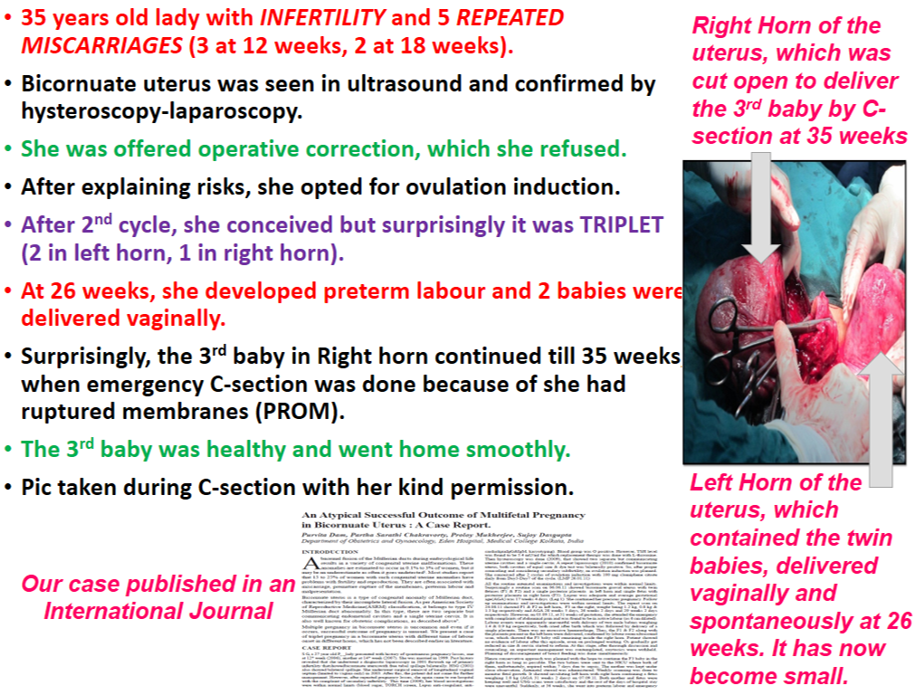 In many cases (more than 70%) cases hormonal problems may be there and these may cause both 1st and 2nd trimester RPL. However whether treatment us beneficial or not, is again controversial. The commonest pattern is Luteal Phase Deficiency (LPD) due to deficiency of hormone progesterone. PCOS (Polycystic Ovaries) is also asdociated with RPL. The other causes are uncontrolled diabetes, thyroid problems, high prolactin and high testosterone, high insulin and low ovarian reserve. As mentioned earlier, it is not clear whether they all need testing and treatment but usually tests advised for these are blood for progesterone, TSH, Prolactin, FSH, LH, AMH, Insulin, Testosterone, sugar, HbA1C etc. Treatment is usually progesterone supplement along with correction of hormonal imbalance. It is to be mentioned that these patients need high dose of thyroid drugs (TSH normal for other people may be considered abnormal for RPL) and more tight control of blood sugar in diabetes.

In 60-70% cases the cause is Thrombolphilia, that is tendency to thrombosis or blood clotting. The most common is anti phospholipid antibofy syndrome (APS) which nay or may not be associated with thrombosis in other sites but can cause thrombosis if blood supply to the baby and thus causes stopage of its heart and miscarriage. Although more common in the Western World, some Hereditary Thrombolphilia may be found in other family members and commonly cause miscarriage and thrombosis. Deficiency of folic acid and vitamin B12 rarely xan cause thrombosis and RPL. The APS testing is often successful, so as the treatment with aspirin and heparin injection throughout pregnancy. With this 80% women can expect full term pregnancy. Folic acid and B12 vitamin supplement is commonly given to RPL patients. Whether testing for hereditary thrombophilia is needed in our country or not is controversial. But treatment is like APS- that is aspirin and heparin injection. 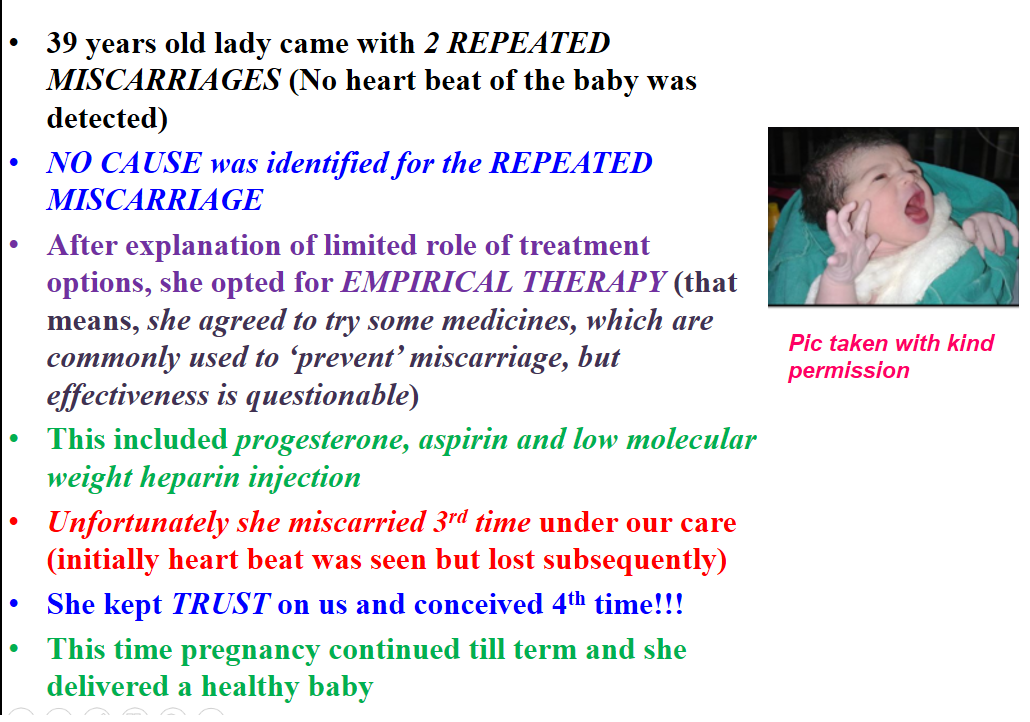 Diseases of mother like diabetes, epilepsy, liver or kidney diseases, SLE etc can cause miscarriage. Exposure of mother to harmful substances like environmental pollution, radiation, chemotherapy and some toxic drugs, smoking, alcohol, cocaine, cannabis etc are also responsible but the latter usually cause sporadic miscarriage rather than RPL. So these drugs should be stopped and replaced by safer drugs and the diseases must be treated properly. Even exposure of father to some drugs can cause RPL. Again some abnormalities of sperms may cause RPL. So, semen analysis of the husband is usually done as a test for RPL.

The most controversial topic for RPL is the infections. But itbis the fact proved by scientific studies that only infection in current pregnancy causes miscarriage. So infection is a cause of sporadic miscarriage, not RPL. In the past TORCH testing was very much popular but nowadays it is obsolete test and there is no scientific ground for tests or treatment of TORCH. Only test we recommend is rubella testing. If rubella IgG is negative that means you may get infection in pregnancy so we advice to take rubella vaccine and avoid pregnancy for one month. On the other hand, rubella IgG positive means you are already immune and thus you can never get rubella. So vaccine is not useful in those cases. If any genital infection is found in husband or wife, both if them should be tested and treated aggressively. 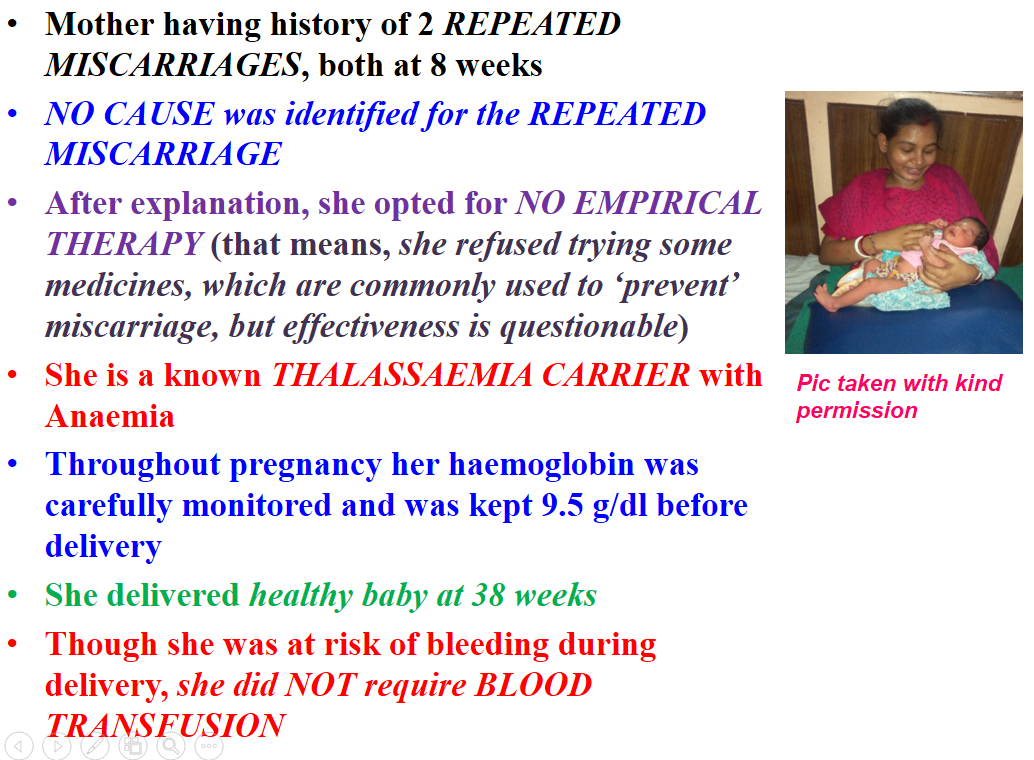 First of all we need to know when we should advise tests. Assuming that most cases of miscarriages are SPORADIC, we usually do not advise investigation after single miscarriage unless the couple insists or there is some reason by the doctor to suspect some abnormalities that might cause future miscarriage. In the past testing was started after 3 miscarriages. But nowadays we do not want to give the couple, especially the woman a third trauma. So we usually advise tests after 2nd miscarriage. The tests usually start with checking for chromosome of the baby. It is followed by chromosome analysis of both the partners along with proper history taking and physical examination. Semen analysis is done for the husband. The wife is advised ultrasonography, routine blood, thyroid testing, testing for APS and blood group. These are tests usually done everywhere. Further tests are done depending on the results if initial tests and especially if no cause is found after initial tests. It should be mentioned to the couples that the 2nd group if tests often do not have scientific grounds and are done only on benefit of doubt. They may not change the management plan. TORCH test is not done in modern era. 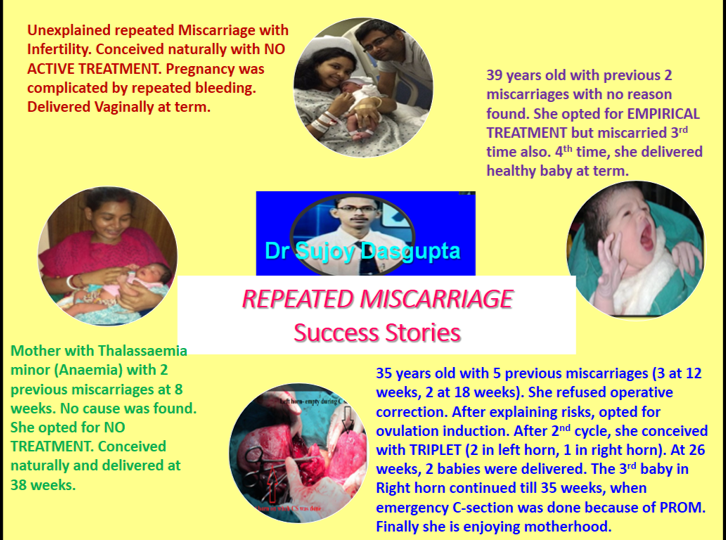 The basic treatment is support if the couples, reducing stress as stress can be responsible for RPL. When a cause is found this should be treated. While an optimistic approach should be taken with expectations for normal pregnancy in future but this should be based on scientific and realistic approach to avoid future frustration. The treatment may not be 100% effective and most treatment may not have scientific base but are usually not harmful. Treatment may not guarantee a successful future pregnancy but a positive attitude is necessary. This is called TENDER LOVING CARE (TLC) where proper support and discussion can help more than explanation if mere statistics. Treatment should be continued both before and after pregnancy confirmation, as mentioned above. This is to be mentioned that even after 6th miscarriage, the chance that future pregnancy will be normal is more than 50%. So, the message should be not to give up hope.