All Reports are OK, still cannot conceive. What to do? 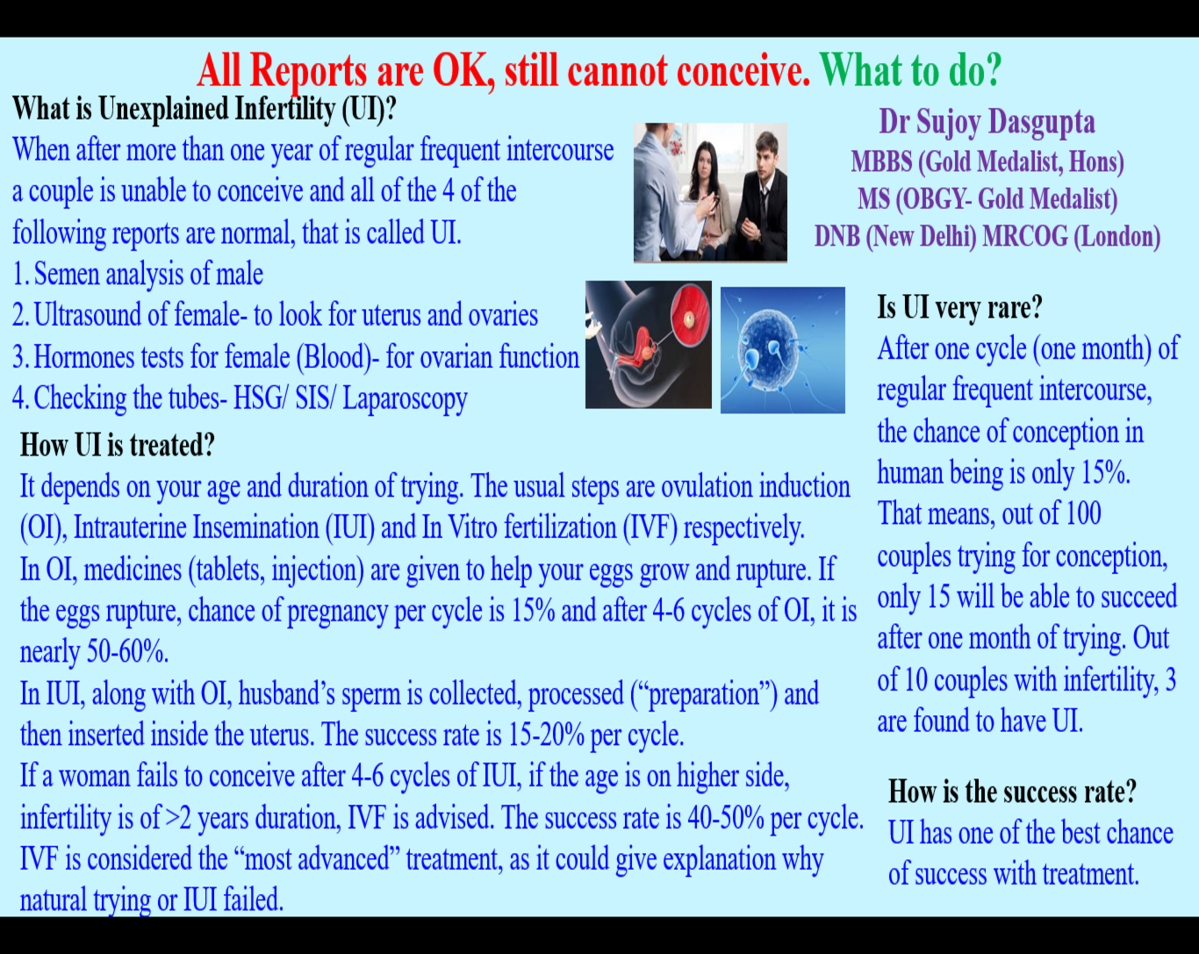 All Reports are OK, still cannot conceive. What to do?

What is Unexplained Infertility (UI)?

When after more than one year of regular frequent intercourse a couple is unable to conceive and all the reports are normal, that is called UI.

After what tests, it is called “Unexplained”?

2.Ultrasound of female- to look for uterus and ovaries

3.Hormones tests for female (Blood)- to look for ovarian function

If all these are normal, that is called unexplained.

Not at all. Out of ten couples struggling to conceive, three are found to have UI. It should be kept in mind that, after one cycle (one month) of regular frequent intercourse, the chance of conception in human being is only 15%. That means, out of 100 couples trying for conception, only 15 will be able to succeed after one month of trying. The word “Regular” and “Frequent” are important; because to achieve pregnancy, couples are advised to keep intimate relationships for at least 2-3 times a week. Thus, chance of pregnancy after 6 months, 12 months and 24 months of regular trying are respectively 60%, 80% and 100%.

In most cases, usually we advise to investigate after one year of regular and frequent intercourse, when the couples fail to conceive.

Is it really “Unexplained”?

The reason may be mere chance factors. Otherwise, it may be because of some factors that we cannot detect by routine tests. The possibilities may be some molecular defects in sperms or eggs, some minute damages in the tubes, some defects inside the uterus or some defects in the embryo.

How UI is treated?

The treatment depends on your age and duration of trying. If your age is less than 35 years and infertility is of short duration, a few periods of natural trying can be done. If this fails, the next steps are ovulation induction (OI), Intrauterine Insemination (IUI) and In Vitro fertilization (IVF) respectively.

What is Ovulation Induction?

Medicines (tablets, injection) are given to help your eggs grow and rupture. In the first cycle, it is important to see (by ultrasound) whether eggs are growing or not. If the eggs rupture, the chance of pregnancy per cycle is 15% and after 4-6 cycles of OI, it is nearly 50-60%. That means, out of 100 women who had ovulation, 15 can conceive after one month.

How IUI is done

IUI is one step ahead of OI. Here along with medicines given for OI, husband’s sperm is collected, processed (“preparation”) and then inserted inside the uterus. The success rate is 15-20% per cycle.

When IVF is advised?

If a woman fails to conceive after 4-6 cycles of IUI, if the age is on higher side, infertility is of more than two years duration, IVF is advised. The success rate is 40-50% per cycle.

What is the “best” treatment?

Nothing is best as there is no hard and fast rule. IVF is considered the “most advanced” treatment, in the sense that it bypasses almost all the steps of natural conception, which may be defective in UI. Also, IVF could give explanation why natural trying or IUI failed (like problems in sperms, eggs or embryos).

How is the success rate?

Unlike other causes of infertility, UI has one of the best chance of success. Eventually, majority of the couples will conceive.

Being unable to know what the exact problem is, can cause frustration. But So, infertility treatment is actually based on stepwise manner. We initially advise some tests and then advise a treatment. If that treatment fails, we move to next treatment. So, all the time, you have to keep patience. Don't give up hope.